Digital India: Why Network Infrastructure should be Top Priority? 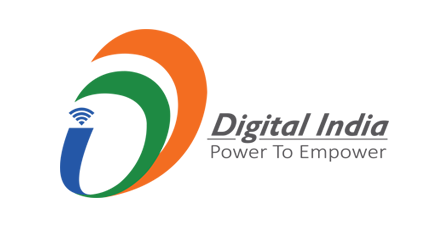 The Digital India program of the Indian Government is centered around three key vision areas: digital infrastructure as a utility to every citizen; governance & services on demand and digital empowerment of citizens. These are fairly well-articulated goals and are arranged in order of their logical sequence, though the official government document does not say that anywhere. Digital empowerment is not possible without efficient government services and access to information, which are, in turn, impossible to have without adequate digital infrastructure.

However, the whole idea gets defocused when it comes to the Government’s implementation plans. The entire program is divided into nine pillars for that purpose. That itself is not a bad approach as it brings in focus to plans and makes it easier to have right milestones and measures. But at the top, they must converge somewhere seamlessly so that the whole would be a lot more than the sum of parts. Between the larger vision of transforming India and the individual pillars, there is no strategic approach though the program implementation is dealt with a good amount of detailing.

This creates two issues. One, while it will still achieve specific objectives detailed out, the result of the entire program will be sub-optimal. Two, it makes it difficult to prioritize. 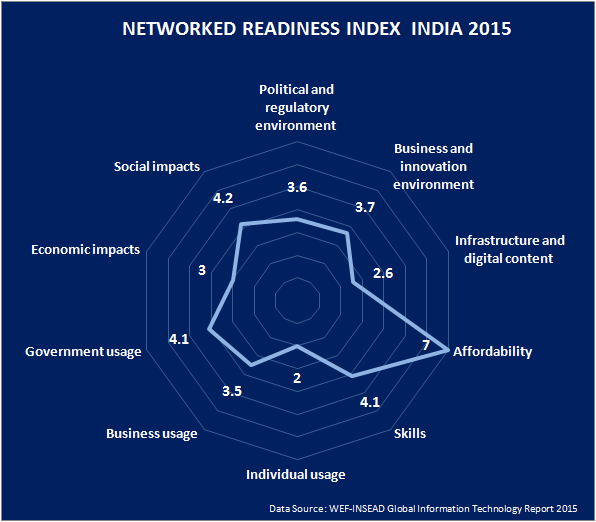 Let us examine Digital India by comparing it with an international framework that is available and widely known. The Networked Readiness Index (NRI) of World Economic Forum (WEF) is widely understood and can be a good basis for comparison with the rest of the world.

This year’s Global Information Technology Report (GITR 15), interestingly themed, ICTs for Inclusive Growth, where the NRI is featured and countries ranked on its basis, India ranks 89 with a score of 3.7 on a 1-7 scale (7 being the best). That itself is not too surprising, though India has potential to do far better.

So, let’s get into analyzing the individual parameters. The NRI is calculated from four sub-indices, divided into ten pillars, as shown in the figure.

India ranks no 1 on affordability, which is a testimony to India’s ability to create most of IT services locally using local workforce. That is not a surprise. India’s comparatively better score of 4.1 in skills just proves that point. Two others—business innovation environment and business usage—are not surprising either and the government cannot do much there for immediate impact except for creating long term favourable policies.  Economic impact is low and that too is not surprising.

What is good to see is that India scores relatively better in both social impact and government usage. More needs to be done in those areas. Digital India adequately addresses these areas and they should improve. Policy and regulatory framework is where the entire effort of this government is focused and that should see a huge jump, if everything goes well.

Individual usage is often a result of all this and it is difficult to try influencing it without addressing other pillars.

That leaves us with one pillar—infrastructure and digital content—where India’s score is abysmally low at 2.6. What’s worse, it has gone down by 0.6 between 2012 and 2015—the biggest fall in score across all parameters (pillars) in NRI, in the same period.

One can always question the scores and rankings like these—and some do. And to be fair to them, you cannot formulate your strategy based completely on their standardized parameters. But they often do throw broad findings that are useful.

In this case, other studies do point to the same. Consider this. India has 11% of the world’s Internet users and is next only to China in terms of absolute numbers. But when it comes to quality of connectivity—needed to deliver critical services like government services—it is among the world’s worst.

According to the latest State of Internet Report (Q2 2015) by Akamai, India has an average connectivity of 2.4 Mbps, as compared to 5.1 Mbps globally. Indians get the lowest average connectivity speed in the entire APAC region, about 1/10th the average speed that South Koreans get and less than half of what Sri Lankans get. It has second lowest penetration of 4 Mbps broadband adoption at 11%. 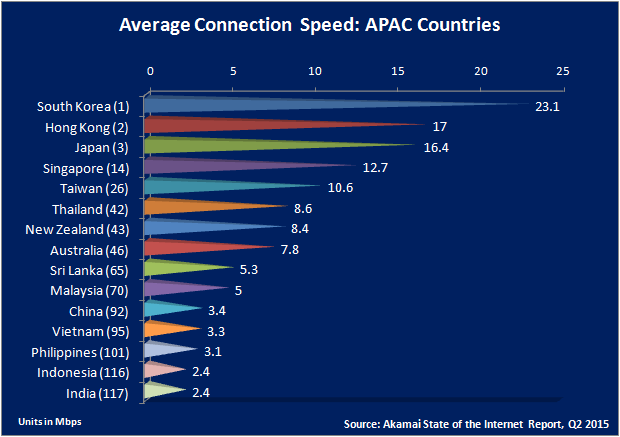 Similarly, India has the world’s second largest number of mobile phone users. Yet, data connectivity on mobile is really slow. According to the same report, the average page load time in mobile in India is the second lowest in Asia Pacific. It takes an average of 5669 microsecond to load a page on mobile, five times longer than it takes in Pakistan.

Clearly, no major services and applications can work seamlessly without the right network infrastructure. Unlike many other parameters in the NRI, such as, say, business innovation, it is not something that requires a lot of things to fall in place. It is almost in the government’s hand to drive and achieve it, though private players may implement it.

It is not that the government does not understand that. Broadband connectivity is the first among the nine pillars of Digital India. But for some reason, we haven’t seen much action on this front. While in many areas, the government has announced either new plans or rehashed, rebranded plans, in broadband, it continues with UPA’s NOFN, the implementation of which has been delayed. There’s no major new plan or no announcement to speed up the implementation.

If Digital India has to be effective in a time-bound manner, rolling out network infrastructure quickly should be the top priority.