The World Economic Forum’s Global Risk Report for this year, however, places massive data theft as one of the top ten most likely risks 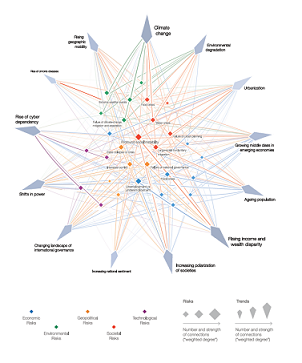 The World Economic Forum has published the Global Risk Report of 2016, the 11th edition of the annual report.  The report, based on a study involving 750 experts from WEF multi-stakeholder communities, has rated large scale involuntary migration (refugee) problem as the top risk in this edition, in terms of likelihood. Just 10 years back, GRR 2007 ranked Breakdown of Critical Information Infrastructure as the most likely risk. The fact that it does not feature among the top ten most likely risks is a testimony to the fact that the Internet and global information infrastructure have become far more robust and dependable.

Now, that is the good part.

While few doubt the reliability of the infrastructure, there is another risk that looms large.  Data fraud or theft has been ranked at No 7 most likely risk by the study, ahead of such risks as illicit trade and water crises. When it comes to a combination of likelihood and impact—the issues that we have to get really worried about—Cyberattacks have been rated as one of the top ten risks by the study.

For the study purpose, GRR categorizes all risks into five buckets or categories—economic risks, environmental risks, geopolitical risks, societal risks and technological risks. For this year’s study, 29 risks were identified, out of which four where categorized as technological risks: adverse consequence of technological advances, breakdown of critical information structure, large-scale cyberattacks, massive incidents of data fraud/theft.

How Serious are the Tech Risks?

For a better perspective on how this multistakeholder WEF community sees technological risks, it is imperative to look beyond just this year’s finding and look at how these risks have been perceived in the last few years.

CIO&Leader analyzed last five year’s Global Risk Reports and found that in general, the respondents—who come from politics, economics, business and other aspects of public life—see technological risks as most likely but less impactful.

The trend shows that the respondents perceive the possibility of large scale cyberattacks to be less and less likely over the years. It dropped from No 4 most likely in 2012 to No 6 in the next year to No 10 last year, before making an exit this year.

On the other hand, in the last five years, a technological risk has featured as a top 10 most impactful list only twice, that too towards bottom of the table.

Should we take this perception of technological risks not being as much impactful as other risks at its face value? Or is it naivety on the part of the community?  Or is it a vote of confidence on the technological fraternity?