Where are the women IT leaders? 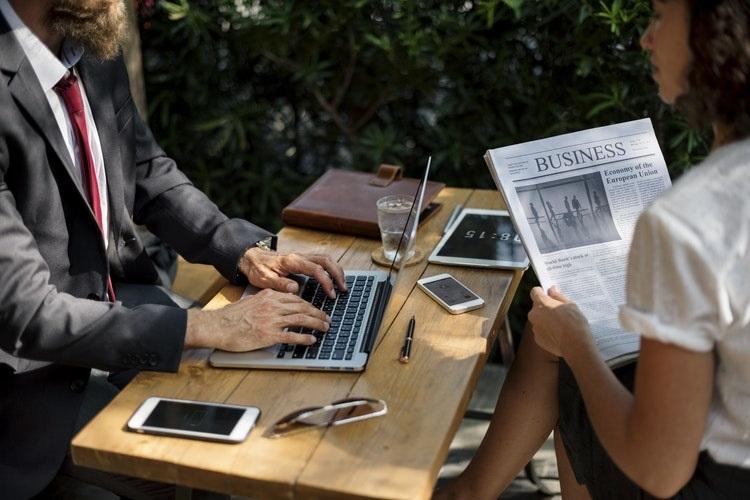 In the late 19th century, it was the suffragettes, members of the women's organizations in the United Kingdom or The Women’s Indian Association (WIA), who fought for the right of women to vote.

Today, the idea of mutiny seems a bit farfetched.

However, women are still underrepresented in the workforce. According to UN gender statistics, India is one of the few countries where the rate of participation of women in the workforce has drastically declined in the last decade. It fell from 33.7% in 1991 to 25% in 2016.

For years, we have tried to break the glass ceiling and rise to the top. We have held our heads high and played by the rules. Our ambitions have been as high as the men in the workforce; sometimes, even bigger.We have accomplished our goals through hard work and dedication in constant pursuit of excellence. We haven't allowed family pressures to come in the way of our work. Some of us have remained single such that our work doesn't affect professional success. Others have married and borne children and taken care of an array of responsibilities thereafter. 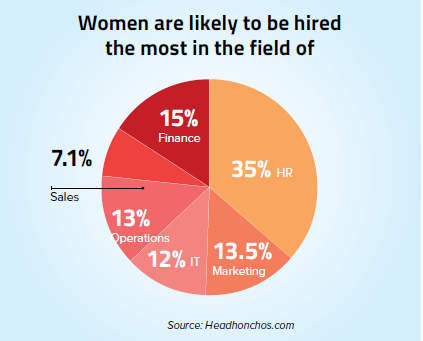 And yet, the men around us have continued to get promoted faster and be paid more. The aim is not to nitpick but to get to the core of the problem. The numbers are proof.

According to a 2016 International Labor Organization report, women in India earn 33% less than their male counterparts. Not only that, Indian women are also overrepresented in low paying jobs. In fact, women make up 63% of the lowest earning Indians but just 15% of the highest paid ones, making such an uneven representation of women in the workforce.At the top, especially, women are nearly absent. To ensure gender diversity in boardrooms, two years ago, Securities and Exchange Board of India (SEBI) asked all listed firms to appoint at least one woman director on their boards. A year later, several large enterprises had failed to meet this requirement. There are a handful of popular women directors in India. Kalpana Morparia, Naina Lal Kidwai, Falguni Nayar, and Shyamala Gopinath — all of whom have had long professional careers and held top jobs. The percentage of women CEOs in India is higher than the average of APAC and Australia as well as Europe and Americas at 7.8%. Names, such as, Chanda Kochhar at ICICI Bank, Shikha Sharma at Axis Bank, Mallika Srinivasan at Tractors and Farm Equipment Limited (TAFE) are common occurrences if one looks up women CEOs in India.

At 12.8%, the women CEOs in India  fare better than women CIOs in India at 3%.  The number of women in technical fields is a puzzle that is becoming harder to solve. According to a spokesperson at SHEROES, a job search portal that exclusively caters to women, “CIOs are part of women in leadership initiatives, which many companies are trying to address. But specific initiatives around women CIOs are few and far between.”

Where are the women IT leaders?

In order to address this raging question of our cover story, it was important for us to present the status quo, that is, women in India, yet, don’t make up half the workforce, and that there aren’t enough women in the senior leadership positions.

To make matter worse, many women IT leaders shy away from the gender discussion. When I reached out to a few leaders for the story, they declined to speak on the issue or did not respond to the request.

It is also true that the challenges faced by women IT leaders, to a large extend, aren’t different from women in other fields. Whether it is children or elderly care who are capable of changing the course of their career or it is the pressure from family, all of which have a tendency to create an emotional tug between home and work. The leaking talent pipeline is also a serious impediment to the success of women. It is one of the main factors that affect the density of women IT leaders at the top layer. It is also the impression of IT being a difficult and a demanding profession that a large number of women switch their careers after the balance becomes difficult to maintain. 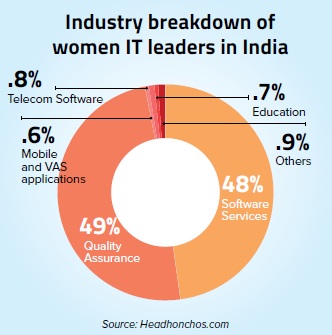 Moreover, for leaders to take gender diversity seriously and act on it, it has to be embedded into an organization's DNA. Otherwise, it is impossible for them to act on their own.

A few technology companies in India have been doing more than just lip-service to address the leaking pipeline issue.

IBM, for instance, has created a women leaders council, which focuses on attracting female employees and ensuring their development and retention. Women are also enabled through networking groups and mentorship programmes and receive visibility in conferences as speakers or participants.

Last year, Accenture's Delivery Centers for Technology in India rolled out the 'High-Tech Women' programme that aims to see more women make the journey as technical architects and take part in leadership roles. Women in Accenture's Delivery Centers for Technology are now getting organizational commitment, investment and backing to advance their careers. Under the mentoring programme, each of Accenture's technology leaders spends 18 months serving as mentor to two women who are at mid-career.

In the enterprise IT side, names of top woman achievers such as Harmeen Mehta at Airtel, Vidya Srinivasan at Genpact, Lekha Bajpai at IMRB International, Maninder Kartik at Whirlpool India, Shobhana P Ravi at TAFE, Aruna Rao and Kirti Patil at Kotak group of companies, have set the bar really high for other women to follow their league and pursue a career against all odds.

However, there is some good news.

There are numbers that indicate there is an upward trend in the hiring of Indian women IT leaders with over 15 years of experience.

The number of women with technical degrees (or equivalent) has grown to 12 million from 5 million in 2001. while the country had only about 4.8 lakh women engineers, this number grew to an astonishing 20 lakh and over in 2011.

The hiring of women candidates with experience between 0 to 4 years (entry level) rose to 113% in 2016. These statistics from HeadHonchos.com, an Indian job search and career portal, are exceptionally encouraging.

If the hiring of senior women IT leaders increased by 29% last year, the middle leadership band saw a 35% increase in the hiring of Indian women. The sudden improvement in numbers over the last year are indicative of a trend that is slowly bridging the gender divide.

However, to study this impact intimately, we decided to present Genpact's success story and how it is chasing the 50/50 goal.

Article Tags:
gender
Women in IT
IT Leader
Women leader
Leadership
Where are the women IT leaders
CIO&Leader
Reading List 2017