Datacenter infrastructure is the most commonly targeted for cost savings 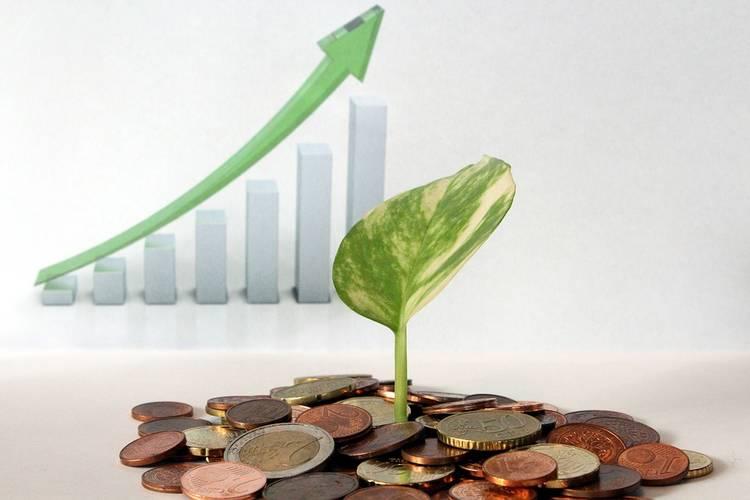 Cloud solutions, cybersecurity and analytics are the top technologies targeted for new and additional spending by public sector CIOs in 2018, while datacenter infrastructure is the most commonly targeted for cost savings, according to a survey from Gartner.

Gartner's 2018 CIO Agenda Survey gathered data from 3,160 CIO respondents in 98 countries and across major industries, including 461 government CIOs. Government respondents are segmented into national or federal; state or province (regional); local; and defense and intelligence, to identify trends specific to each tier.

Digital transformation is the top-ranked business priority among government CIOs overall, followed by security and governance.

"Digital transformation revolves around data. To be successful, public sector CIOs need to focus on expanding their data and analytics capabilities and creating a data-centric culture, by increasing the availability of open data and APIs for internal use and public consumption," said Rick Howard, research vice president at Gartner. "Building out data analytics infrastructure is fundamental to improving government program outcomes and services to citizens."

The survey found that digital business/digital transformation is more important for government (first priority for 18% of respondents) than for all industries (17%), with the exception of defense and intelligence agencies (6%). Private sector companies ranked it second, after growth/market share. The next three business priorities for government are security, safety and risk (13%); governance, compliance and regulations (12%); and technology initiatives/improvements (11%).

"Government CIOs have conflicting priorities — to bring transformative change to their organizations, while pursuing compliance-oriented priorities," said Mr. Howard. "They will need to work constructively with other business leaders to agree how to balance risk and innovation to support digital transformation."

In response to the question "Which technology investment is most crucial to achieving your organization’s mission?" cloud and BI/analytics were mentioned by 19% and 18% of government CIOs respectively, followed by infrastructure/datacenter at 11% (see Table 1). National and federal CIOs are the exception, placing customer relationship management as a distant third. 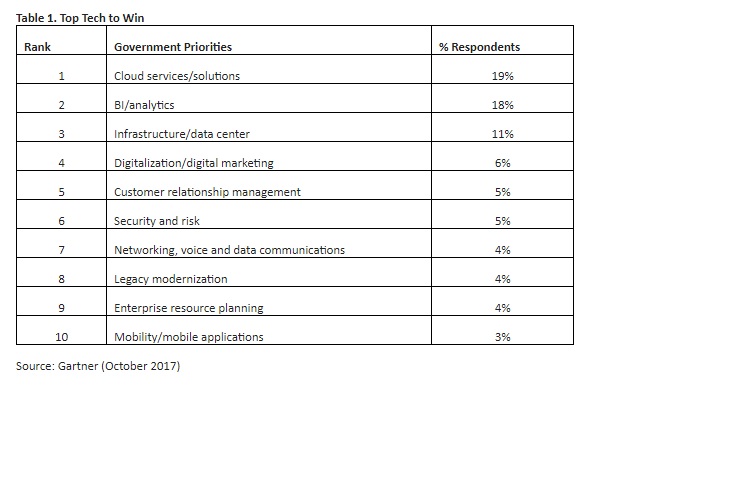 Four categories that differ from other sectors:

"Many government CIOs are rebalancing capital expenditure (capex) and operating expenditure (opex) spending patterns to reduce technical debt, while making the strategic shift to cloud," Mr. Howard said. "They should consider cloud as the means to accelerate the digitalization of their organizations and enable the business optimization that results."

Consistent with ranking cloud, analytics and infrastructure/datacenter as crucial to achieving the organization's mission, government CIOs also anticipate increased spending in these areas. 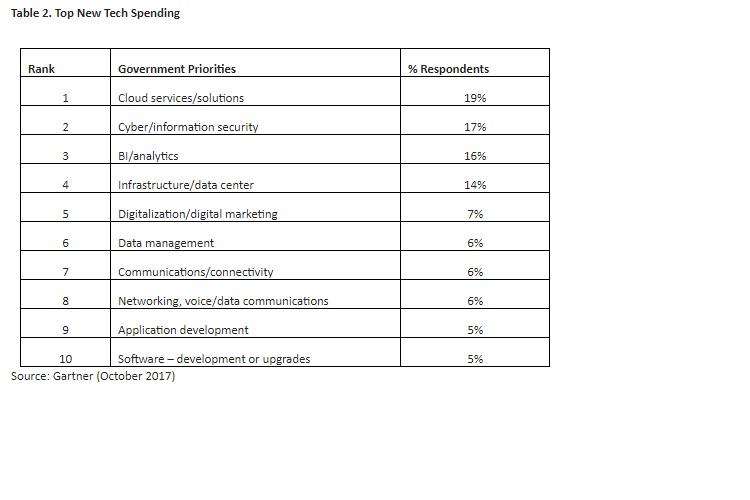 While only 5% of government CIOs considered security and risk as crucial to achieving the organization's mission, 17% expect to boost spending in cyber/information security. This indicates that security is not a competitive differentiator for government, but additional spending over historical levels in this area is warranted as a response to relentless attempts to exploit system vulnerabilities.

"The lessons of reputational damage and individual harm that can result from a data breach or compromised security have not been lost on business leaders," Mr. Howard said. "Consequently, they're willing to allocate more resources and attention to lower risk exposure from cyberattacks."