India ranks 20th out of 24 countries in global cloud study

India's is a drop of two positions this year 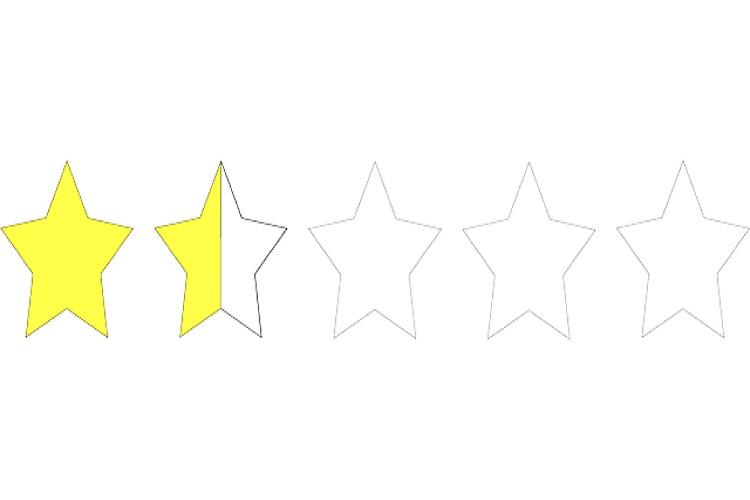 India ranks a lowly 20th out of 24 leading economies, in a recent global study of cloud preparedness. The BSA 2018 Global Cloud Computing Scorecard is published by Business Software Alliance, a leading advocacy for the global software industry. India’s rank is a two position drop from its 2016 ranking.

While India ranks below 10 in each of the seven parameters considered by the study, its performance in two parameters—IT readiness & broadband Deployment and Intellectual Property Rights—is particularly bad. In IT Readiness & Broadband Deployment, it ranks at the bottom of the table. Comparatively better are its rankings in Cybercrime (14th) and Standards & International Harmonization (15th). 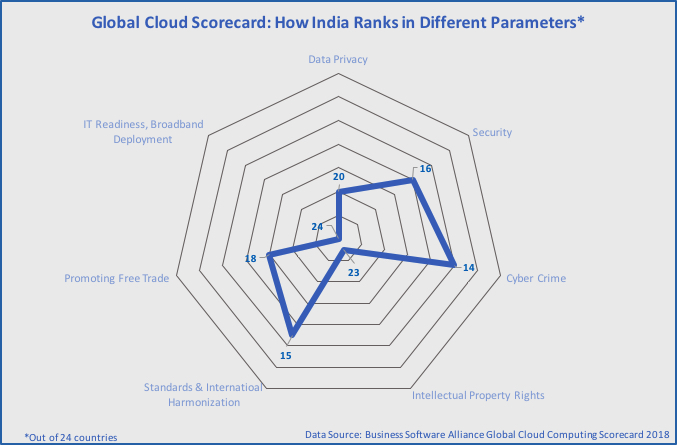 “Laws and regulations in India have not entirely kept pace with developments in cloud computing, and some gaps exist in key areas of protection; notably, India has not yet implemented effective privacy legislation, although work is underway to address this issue,” says the report explaining India’s poor show.

The report also points out that there is a gap in trade secrets protection in India.

“Guidance for examiners on how to evaluate patent applications for software-enabled inventions is lacking, although the revocation of guidelines that would have prevented most computer related inventions from being subject to patent protection if novel hardware was not present is a step in the right direction. Furthermore, India still has not ratified the WIPO Copyright Treaty,” the report notes.

The report, however says that India has a comprehensive national cybersecurity strategy in place and strong cybercrime legislation while pointing out that some laws and standards in India are not technology neutral (e.g., electronic signatures), and these may be a barrier to interoperability.

Germany ranks at top with highest score on the Scorecard—due to its national cybersecurity policies and promotion of free trade—while Japan follows closely The United States ranks No 3. 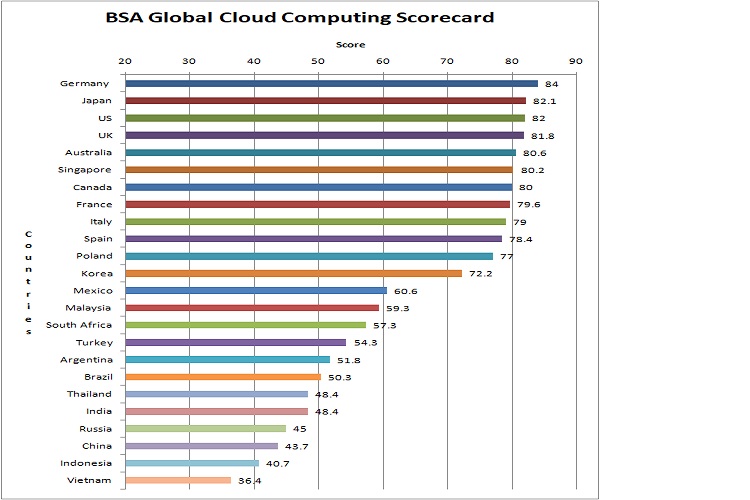 The BRICS nations all rank in the bottom half of the table. South Africa with a rank of 13th is Brazil with a ranking of 18th is the top BRIC nation in the list, followed by India at 20th. Russia and China follow India.

Some of the other key findings of the study include

By examining the legal and regulatory framework of 24 countries, the Scorecard aims to provide a platform for discussion between policymakers and cloud service providers. This dialogue can help develop an internationally harmonized regime of laws and regulations that facilitate cloud computing.

“The Scorecard is a tool that can help countries constructively self-evaluate their policies and determine next steps to increase adoption of cloud computing,” said Victoria Espinel, President and CEO of BSA. “Cloud computing allows anyone to access technology previously available only to large organizations, paving the way for increased connectivity and innovation. Countries that embrace the free flow of data, implement cutting-edge cybersecurity solutions, protect intellectual property, and establish IT infrastructure will continue to reap the benefits of cloud computing for businesses and citizens alike.”