What does hyper-consolidation mean for enterprise CIOs? 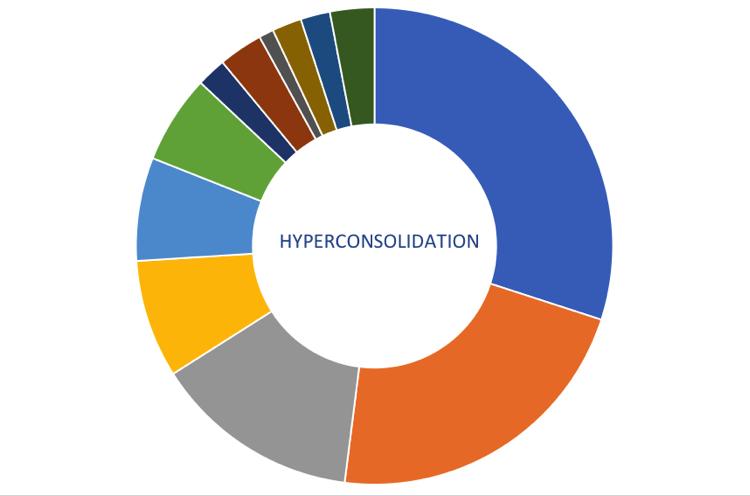 Just a few days prior to this announcement, Synergy had released the data for the cloud infrastructure services market. There too, the top four—Amazon, Microsoft, IBM and Google—together hold 60% of the market share. But the big news is not that; it is that they are continuously gaining market share. In Q4 2017, data for which was released, they have taken away 3% market share from the rest. So, not only are these four dominating the market, they are further strengthening that dominance.

The research firm has also released the Unified Communications as a Service (UCaaS) market data for Q4 last week. Though it did not explicitly indicate revenue market share available Q3 data suggests that three companies—RingCentral, Mitel and 8x8—accounted for close to 55% market share.

These are just four segments for illustration purpose. One can go on illustrating the points further by citing more examples of markets where the top 2-4 players account for more than half the market share.

In short, we are seeing a sort of hyper-consolidation—far more concentrated than even what Prof Jagdish Sheth and Rajendra Sisodia predicted for free, mature B2C market segments in their famous 2002 book, The Rule of Three.

There is little common to the type of companies who hold the dominant positions in these markets. Some of them are IT giants (Cisco, Microsoft), some are well-established niche players (Nutanix) and some are unknown names even to enterprise IT community.

Also, in terms of size, there is little commonality among these markets. Cloud infrastructure services is a USD 45 billion plus market while telepresence is less than USD 2 billion in size.

Yet, there is one thing that is common to all of these: these are all mature horizontal enterprise technologies—areas where CIOs are still the undisputed decision makers, in contrast to the vertical-specific solutions or emerging technologies like AI, IoT and Analytics, where other business and operational managers could be calling the shots.

What does it mean?

Of course, lesser number of vendors invariably suggests that power shifts to the vendors from the buyers. Or the vendor becomes more powerful. This has prompted many to raise the possibility of vendor lock-in.

Though the traditional vendor lock-in of the 90s and prior may not become a reality, it may make cost of switching a bit higher. While the technologies are open and hence no vendor can blackmail a user, today barriers are created by nurturing the ecosystem. So, even if switching may be theoretically possible, every step from finding an integrator to get skilled people to hire may be challenges.

And it is already happening. The cloud players are today projecting the size of their ecosystem more than the services metrics when selling their value proposition. However, it may also mean that from the skill standpoint, things may be less challenging.

However, it may be a worthwhile idea to look at the market through the framework of Sheth and Sisodia’s Rule of Three model. What it says is that free markets often lead to a situation where equilibrium is attained eventually by two kinds of competitors: full-service generalists and specialists who could focus on a sub-market (either products or vertical/horizontal segments).

While full-service companies want to grab market share, specialists’ financial performance deteriorates as they gain market share and they play a margin game—thus driving innovation. While the leaders—the generalists—try to compete by offering price advantages, specialists try to innovate. The middle guys are in disadvantage positions. Often, the model is explained by illustrating the shopping mall analogy. While a few large general stores anchor the malls, high value niche players go there to tap top customers.

Of course, IT markets are still not the ideal candidate (thanks to multiple factors including the non-independence of markets segments from each other) for conforming to the rule of three. Yet, it is not a bad idea to explore the framework to understand.

For example, usually in a Rule-of-three market, the No 1 is the least innovative while No 3 often is most innovative.

Specialists are often forced to be super-niche players creating and commanding dominant position in those super-niches.

The mid-market companies, called ditch companies by Sheth and Sisodia, often are acquired by the leaders.

While no framework or rule can help you manage your challenges, it may be worthwhile to look at the market proactively through this framework to understand how they may evolve.