When an enterprise and a start-up strike up a deal

How to create a thriving partnership and derive business value, resulting in a win-win for both 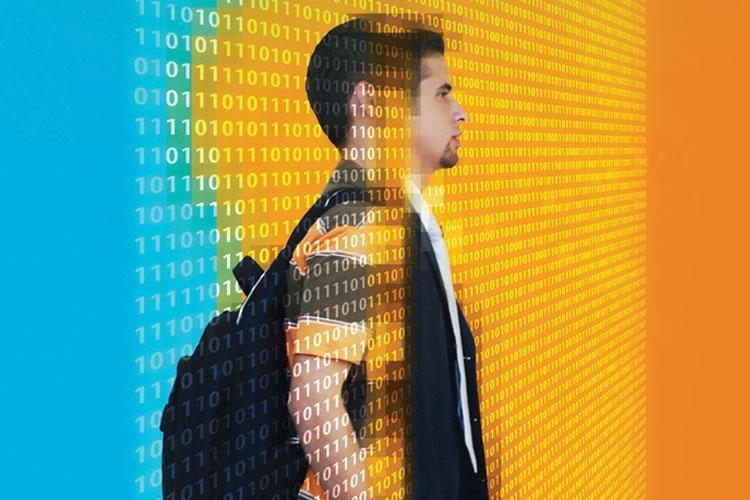 This month, Bhavish Aggarwal made it to Time's 100 list: a list of 100 most influential people in the world. There are very few people in IT circles who don't know Aggarwal. He is the co-founder and CEO of Ola Cabs, who gave India its first app-based taxi service. The start-up idea may not have been unique because it was almost a year after Uber (formerly UberCab) had already launched (March 2009) in California, United States but it still gave urban Indians the convenience and comfort of ordering a cab service on a mobile app. Since then, the Indian tech industry has never been the same. The last decade may have seen the rebirth of the start-up ecosystem in the country with a more sustainable business model in the form of venture capital.
According to a Nasscom Start-up Report published last year, over 1,000 new starts-ups joined the start-up ecosystem in 2017, taking the total number of tech­nology start-ups to nearly 5,200. The B2C focused start-ups like Ola Cabs, have always found favor in the form of funding and have continued to garner 1.5x more average funding value vis-a-vis B2B start-ups, which increased from 27% in 2016 to 31% in 2017, according to the report.
However, the year 2017 is illustrative of a trend that has been in the making for the last few years. A trend that has observed an exponential growth of start-ups with B2B focus - with more than 47% of start-ups out of the 1,000 selling technol­ogy to enterprises. According to the report, this share of B2B start-ups was higher than B2B share in the overall start-up base of 40%. Clearly, the enterprise product emerges as the top vertical for B2B start-ups, followed by fintech, health tech and e-commerce. 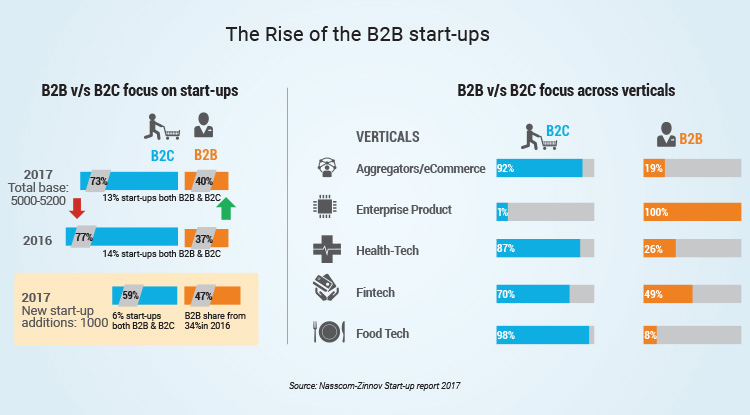 Source: Nasscom start-up report 2017
According to Gartner's 2014 agenda, The IT core — infrastructure, applica­tions, information and sourcing — was built for the IT past. CIOs report much of their new technology spending going towards improving core systems and capabilities and needed renovations to ensure fit for purpose and being “digi­tal ready” include moving to a more loosely coupled “postmodern-ERP” paradigm, deploying public and pri­vate clouds, creating the information architecture and capabilities to exploit big data, and augmenting conventional sourcing with more innovation, includ­ing sourcing from, and partnering with, smaller and less mature enter­prises. By "partnering with, smaller and less mature enterprises", Gartner was referring to SMB/start-up engage­ment and agile development as a solu­tion to addressing the dual need to simultaneously renovate the core of IT systems and services, and exploit new technology options.
A few years ago when we spoke to enterprise CIOs in India they didn't seem kicked about the benefits of work­ing with technology start-ups. One of the main reasons for this reluctance to give B2B focused start-ups a chance was the lack of trust in the start-ups' ability to sustain themselves. A success or sus­tainability of a start-up or a unicorn was but a candle in a wind for an enterprise CIO. Even if the start-up could prove the viability of its product, the enterprise CIO was unable to prove it to business. 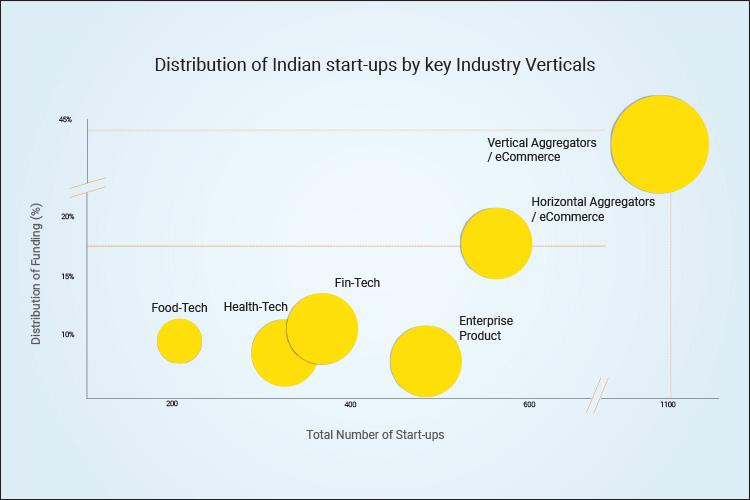 Source: Nasscom start-up report 2017
A lot of enterprises conducted pilots with start-ups (and still do) but wouldn't talk about it. Some of these CIOs belonged to innovation-centric organizations where they believe that they can learn a great deal from start-ups, and
inculcate or maintain a culture of openness and change within. These enterprises and their CIOs were the early adopters of this trend, and the ones who built a framework early on that allowed them to work with start-ups in the best possible way. However, these organizations kept this 'relationship' a low key affair until it became fashionable to talk about the 'association'- and until the digital transformation wave hit them hard.
The folks at Bajaj Auto were way ahead of the curve.
A 72-year old flagship brand of Indian conglomerate Bajaj Group, Baja Auto is one of largest two-wheeler and three-wheeler manufacturer in the world. Despite being one of the old­est family run businesses in India, innovation has always been part of the company's DNA. The company's engagement with start-ups began in 2010 when they realized the need to automate and digitize their assembly lines. The company deployed cobots or collaborative robots, a patented tech­nology offered by Universal Robots, a Danish manufacturer that has just launched UR5, a six-jointed articu­lated arm robot and was expanding its base in Europe, and didn't launch business in India until 2016.
According to Pradeep David, CTO at Universal Robots, Bajaj Auto saw a gradual rise in the productivity and efficiency in their production. It also increased the productivity of their employees along with their product quality. As a result, employees could easily program and set up these low cost robotic arms with 3D visualiza­tion. The actions of the robot are con­trolled and programed by a touch pad or by simply moving the robot arm to show the desired path of movement.
The three-wheeler manufacturer has deployed over 150 cobots since 2010 and is now among the larg­est motorcycle manufacturer in the world. They are of the view that the added benefits of the cobots are easy use, very low annual maintenance and higher energy efficiency.  Vikas Sawhney, General Manager Engineering (Robotics and Automa­tion) at Bajaj Auto, who oversaw the deployment, said of the implementa­tion that they chose Universal Robots primarily due to the collaborative nature of the robots. "The key benefits of Universal Robots’ products such as their compactness, low pay back period, flexibility, light weight, cost- effectiveness, accuracy and their safe­ty, is what ultimately convinced Bajaj Auto about the suitability of Universal Robots for its  standardized offerings," said Sawhney.
Universal Robots wasn't the only start-up that Bajaj Auto worked with.

Article Tags:
innovation
partnership
enterprises
Enterprise IT
start-up ecosystem
when an enterprise and a start-up 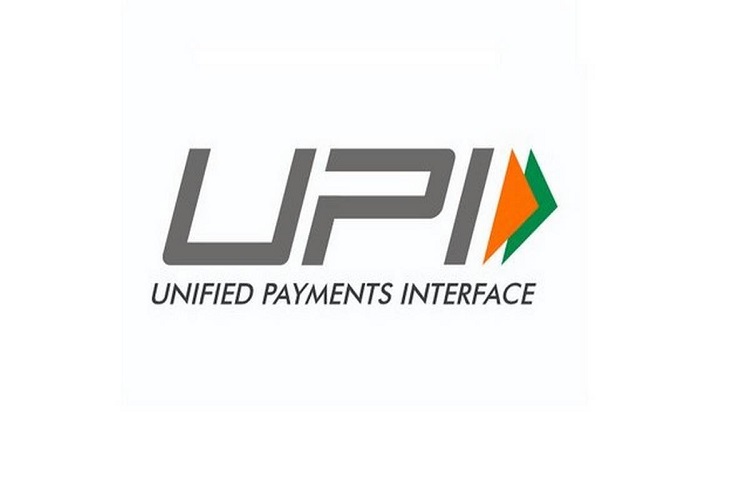 Too much of a good thing… 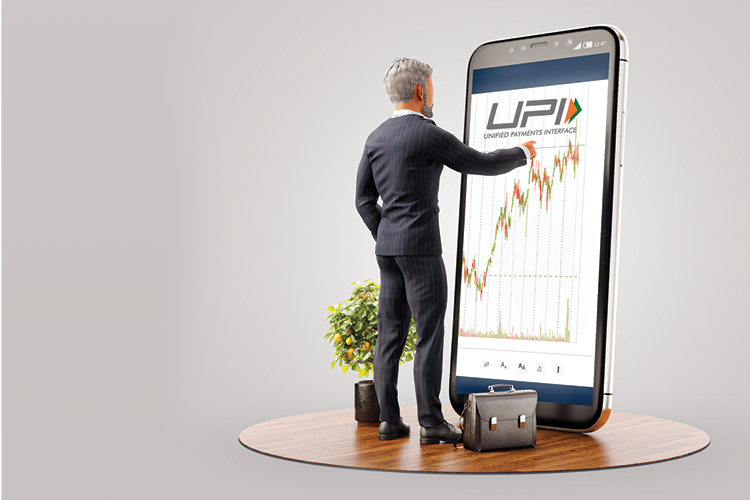 The rise and rise of UPI