The strategy may, however, give a boost to the industry in the short run 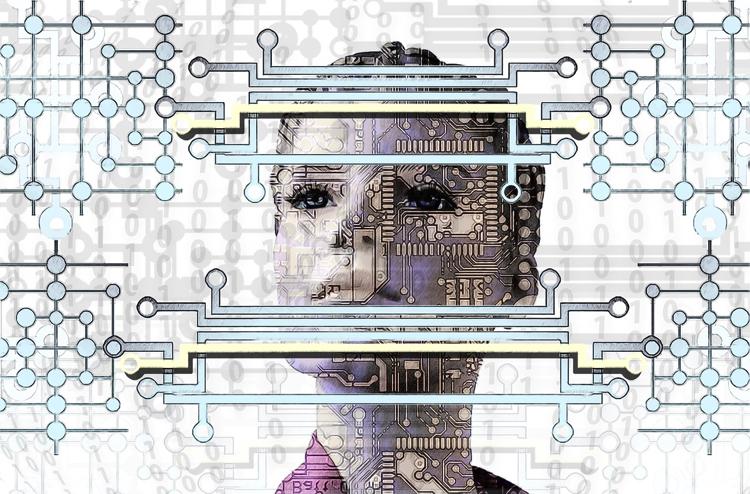 The country that leads in artificial intelligence (AI) will rule the world, Russian president Vladimir Putin had famously remarked a few months back. It is no surprise major countries are all formulating their national AI strategies.

While UK, Japan, France, EU and UAE have come out with their AI strategies, Singapore has launched a national program called AI Singapore under the National Research Foundation, a unit of the Prime Minister’s Office.

However, it is the Chinese government’s three-year development plan for AI, released in July 2017—with more detailed agenda fleshed out in December that year—that has taken the world by storm. Not only has the middle kingdom clear targets about what it wants to achieve, it has not kept its ambition hidden; and that is nothing less than ‘to lead the world’. Though US is still way ahead in AI, China has proven in the past that it means what it says and no one is taking its announcement lightly.

India is the latest to join the party. Earlier this month, India’s Niti Aayog released a 115-page discussion paper on National Strategy for Artificial Intelligence (#AIforAll).

That is not surprising considering there is a lot in it for the industry. It is a fairly detailed low-level plan. Take, for example, the two-tiered research structure, in which the application oriented research is envisaged to be in partnership with the private industry.

Similarly, there is a lot of initiatives aimed at creating capacity—something the industry badly needs. In fact, addressing the skills gap may be the single-most important fallout of the strategy, if implemented properly.

In addition, the cloud platform that the government plans to set up will also see massive tech investments.

All these—coupled with detailed sectoral application plans—will create immense business opportunity for the industries in the short to medium run. The web of myriad government projects and programs will have a multiplier effect on the industry. 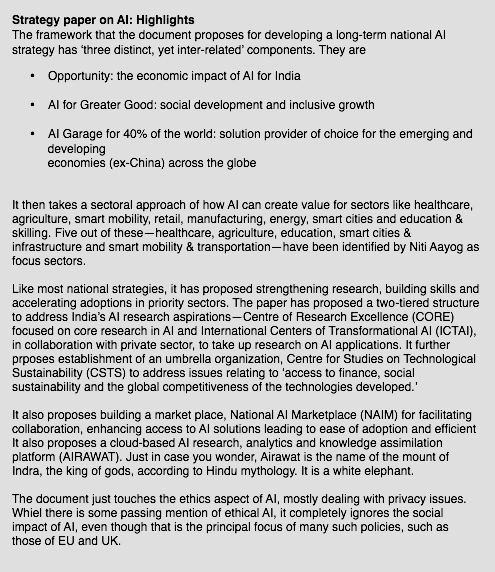 Despite getting into so much of detailed planning, the strategy is not a game changer. There’s no clear goal; there’s no clear positioning either. It has neither the ambition of China nor the will to effectively cope with the socio-economic changes emanating from AI, as planned by EU’s AI policy.

Of course, it is a discussion paper and not a policy statement or stated strategy. “The purpose of this paper is to lay the ground work for evolving the National Strategy for Artificial Intelligence,” says Niti Aayog CEO Amitabh Kant in the intro.

If that is true, it reveals the government’s thinking on the approach it wants to take.

It lacks ambition. Not all ambitions get fulfilled; that does not mean one should not have ambitions. Look at China’s policy; while its clear ambition is to ‘lead the world’, India’s AI strategy paper talks of becoming a ‘garage’ for the developing world. That, by itself, may not be such a bad thing. It will generate enough revenues and keep rolling our body-based services industry.

But if anything, that is a low-hanging fruit and should tactically be tapped for the short run. Some small government intervention may be required to accelerate that but how can it be a topline goal in a national AI strategy?

Should not we aim for more? Should not we use this opportunity to break away from/disrupt the T&M based IT services and create a completely new opportunity for ourselves? You do not need a major policy intervention for Indian IT services companies to start making money from AI. Availability of skilled people will only accelerate that. But is the goal ambitious enough for a nation like ours?

It lacks clear goals. The entire document has a lot of detailing on what should be ‘done’; very little targets about what will be ‘achieved’. Apart from ‘leading the world’, China puts a number to the AI opportunity. In India, there is no targets even for specific plans outlined in the strategy document, let alone a big overall target.

There’s no result orientation; and that may lead to clear lack of accountability.

It ignores negative social impact aspect completely. This is the most visible exclusion from the policy. As a liberal democracy, India cannot just close its eyes to negative impact of any new technological—or for that matter, any—change.

In European Union’s communication on AI for Europe, it is included as one of the three topline objectives—prepare for socio-economic changes brought about by AI by encouraging the modernisation of education and training systems, nurturing talent, anticipating changes in the labour market, supporting labour market transitions and adaptation of social protection systems.

While Indian strategy talks of making positive social impact through AI, it completely ignores this aspect—of negative impact on jobs.

Similarly, when it comes to ethics and privacy, there’s nothing concrete about ethics in AI research or AI applications. The entire section is almost dedicated to privacy issues.

While a lot of government attention and investment will surely give a Phillip to the industry, as a nation, we could realistically aim to achieve more. What is more, without clear objectives, we may just lose the way.

If you do not know where you are going, any road will take you there.