India’s competitiveness is consistently pulled down by its poor technology competitiveness, according to World Economic Forum’s Global Competitiveness ranking, despite relatively better performance in macroeconomy, business dynamism and innovation. 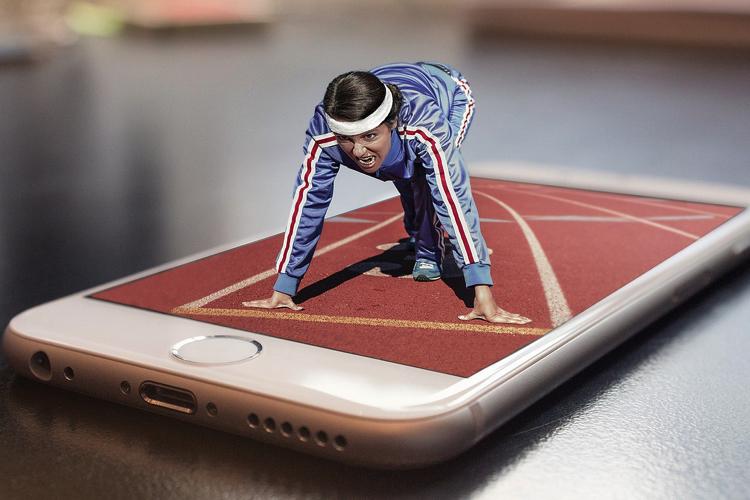 In these days of celebratory reporting, it is no surprise that the news of India’s falling ranking in the World Economic Forum’s Global Competitiveness Index has been severely underreported in Indian media.

Amidst the concern about a severe economic slowdown, India’s competitiveness ranking has fallen 10 places behind its last year’s rank. India now stands 68th among 141 nations ranked by the Index. This is India’s second worst show in the index—a notch below its 2014-15 ranking of 71—when the low rank was explained by the policy changes in the wake of a new government taking over and the policy paralysis which marked the last days of the UPA government. The rank is also a huge drop from its 2016-17 ranking, where India stood at 39 in the list, about which there was a lot of song and dance, with India-being-on-a-new-path narrative. India’s ranking in the first Global Competitiveness Index, published in 2011-12 was 56. 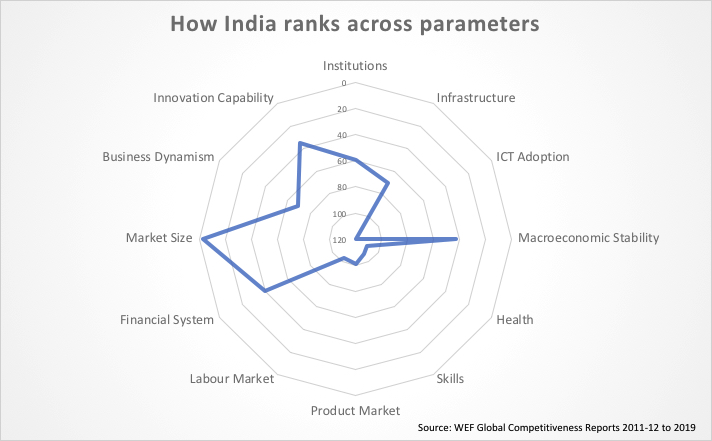 Beyond a generic conclusion that the fall in ranking could be linked to the overall poor economic showing—which may be partially true—the detailed discussion is beyond the scope of this publication.

But what definitely concerns the enterprise technology managers—both at C levels and next levels—is India’s consistent poor show in the technology parameters, which is also at a near all-time low at 120, just one rank below its ranking in 2014-15.

But what is of a greater concern is that, when it comes to technology ranking—indicated till 2017-18 by the sub-index Technology Readiness and for the last two years by the sub-index ICT adoption—has always remained low, debuting at 93 in the first report and has never gone above that—even when in the two years, 2016-17 and 2017-18, the overall ranking moved up significantly.

ICT Adoption pillar—as the WEF report calls individual areas—is one of the 12 broad areas that contribute to overall competitiveness of a country, according to the WEF Global Competitiveness Report. The 2019 report places India 120th most competitive among 141 nations, with countries like Bangladesh, Nepal, Rwanda, Zimbabwe, Senegal, Kenya, Zambia and Nigeria ranking ahead of the country. The ICT adoption index which takes into account parameters like mobile subscription density, mobile broadband density, fixed broadband density, fiber internet subscription density and percentage of population that uses internet, gives India a score of 61, while the No 1 Korea has a score of 92.8, with UAE and Hong Kong falling slightly behind at No 2 and No 2, as Asia takes all the top three positions and four of the top five positions.

Out of the 12 pillars, India ranks at No 3 in Market Size (no-brainer). It also has fairly good ranking (35th) in Innovation Capability and better-than-average (69th) ranking in Business Dynamism. With a 43rd rank in macroeconomic stability, and 40th rank in financial services, India’s business environment is fairly stable and reliable. India also has an average showing in the much-blamed-for-everything Infrastructure area, with a 70th rank—almost in the middle.

India ranks lowest in ICT adoption, among all parameters. That is the reality of this IT superpower.

But does ICT Adoption—which takes into account only the mass subscriptions of communication services—really matter for business’ competitiveness. Yes, it does—except for a few export-oriented businesses and heavily concentrated B2B businesses.

Almost all businesses—not to talk of consumer businesses—today reach out in terms of marketing, sales, distribution and customer service—using the communication medium like phone, Internet, and text messaging. If the recipients do not have access to those modes of communication, businesses have no option but to use the less-efficient physical means. Does it not impact competitiveness, when measured with global peers?

Another concern—though not as big—is the lack of digital skills among the population. But when seen, in conjunction with this abysmal state of access to communication services, it looks impressive. 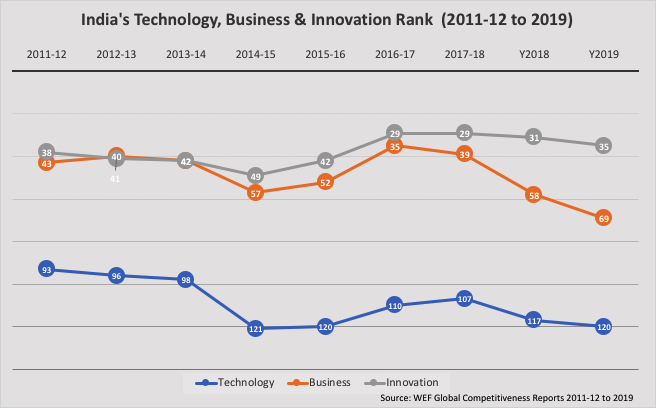 We often get carried away by big numbers told to us by multinational corporations. That is because of India’s large population (it ranks No 3 in market size). Even 30% of 1.3 billion is 400 million—more than the population of most of the countries in the world. But these big numbers do not make us competitive, unless the economic development is distributed well enough and Indian businesses can use the newer media to better serve their customers.

Till 2017-18, the Global Competitiveness Index’s technology pillar was called Technology Readiness. And apart from access to communication services, it also measured availability of latest technologies firm-level technology adoption (a direct measure of business adoption of technology) and FDI and technology transfer.

India did comparatively well on those parameters, though not good enough to impact its overall technology readiness too much. For example, let us look at firm level technology adoption, the most relevant parameter for our community. In 2012-13, when India ranked 96 in overall competitiveness, it ranked 40th on firm level technology adoption, but that too dropped drastically in 2014-15 to 102 and remained below 70, till the new ICT Adoption pillar was adopted and the three above-mentioned parameters were removed.

Whose problem is it?

It is clear from the WEF index that while business sophistication and innovation are fairly good—for a developing country—it is ICT adoption that s single-handedly pulling down-business competitiveness. The only other parameter where India ranks so low (actually, slightly better) is a social parameter: health. And that—though it worries us—does not surprise us.

But ranking so low in technology competitiveness—with IT being projected as India’s top export to the world—is not just shocking is a matter of grave concern.

Can the technology fraternity do something about it? 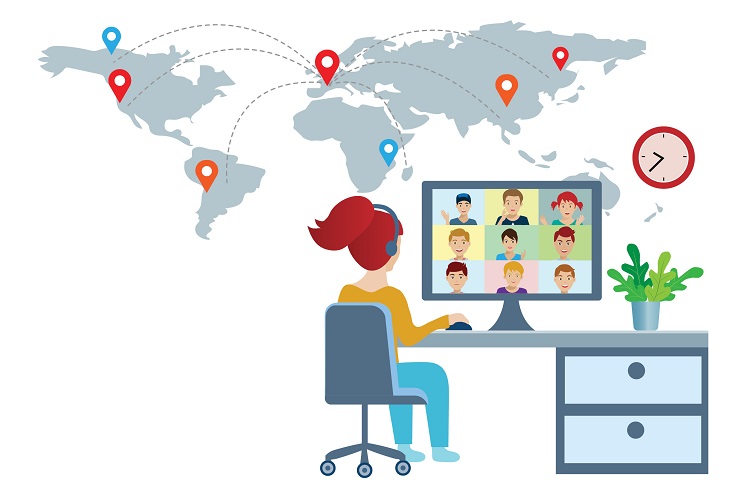 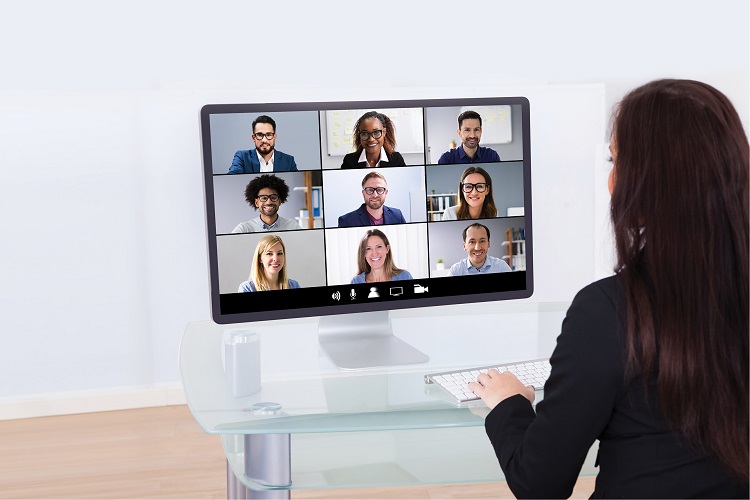