Global spending on IoT to slow this year, then return to double-digit growth in 2021: IDC

Worldwide spending on the Internet of Things (IoT) has been significantly impacted by the economic effects of the COVID-19 pandemic in 2020, although a back to double-digit growth rebound is expected both in the mid and long-term 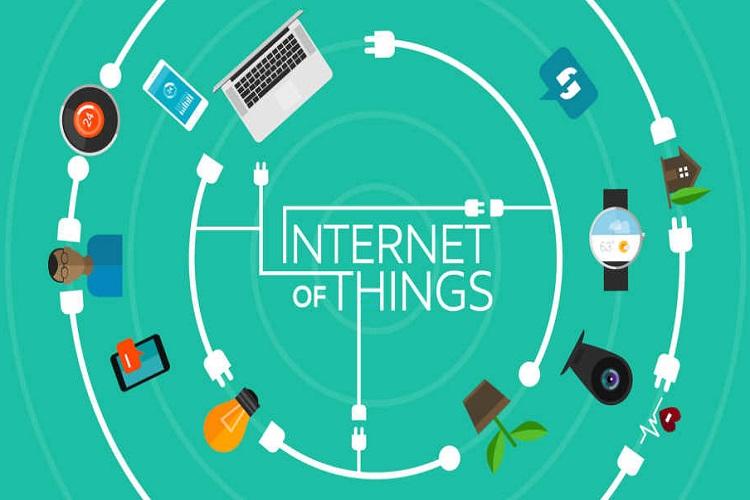 Worldwide spending on the Internet of Things (IoT) has been significantly impacted by the economic effects of the COVID-19 pandemic in 2020, although a back to double-digit growth rebound is expected both in the mid and long-term, according to IDC’s Worldwide Internet of Things Spending Guide. As per IDC, IoT spending growth is 8.2% year over year to USD 742 billion in 2020, down from 14.9% growth forecast in the November 2019 release. Nevertheless, IDC expects global IoT spending will return to double-digit growth rates in 2021 and achieve a compound annual growth rate (CAGR) of 11.3% over the 2020-2024 forecast period.

“Although the current pandemic forced many organizations to pause some innovative IoT deployments, IoT will be a key 'return to growth' accelerator with selected use cases being safe bets for end users to focus on in order to reach a new level of automation, remote everywhere experience, and hyper-connectivity,” said Andrea Siviero, associate research director with IDC’s Customer Insights & Analysis group.

The industries that will see the slowest year-over-year growth in IoT spending are the ones experiencing the greatest impact from the economic downturn caused by the pandemic. Personal and consumer services, which include hotels, theme parks, casinos, and movie theaters, will be the only industry with a decline in IoT spending this year, down 0.1% from last year. The next three industries with the slowest growth in 2020 are discrete manufacturing (4.3% growth), resource industries including oil and gas (5.0% growth), and transportation (5.7% growth). However, these three industries will still manage to achieve a double-digit CAGR at the end of the forecast period. Healthcare, insurance, and education will deliver the strongest industry gains in IoT spending this year with growth rates of 14.5%, 12.3%, and 11.9% respectively. Consumer spending on IoT solutions will grow 13.9% year over year in 2020.

Spending on IoT use cases follows a similar pattern with spending growth affected by the pandemic's impact on the host industry. Two use cases (air traffic monitoring and connected oil field exploration) will experience a decline in spending this year while some of the largest use cases in terms of total spending (manufacturing operations, production automation, and freight monitoring) will see the slowest spending growth in 2020 (5.6%, 5.2%, and 4.7% respectively). The use cases that will see the fastest spending growth in 2020 (electric vehicle charging, bedside telemetry, and remote health monitoring) are in industries where overall IoT spending is on the rise. Smart home spending, consumer driven and the second largest use case in terms of overall spend, will grow 14.4% year over year in 2020.

“COVID-19 adds a new force shaping IoT maturity evolution as the companies have been forced to adjust their technology roadmaps in response to the crisis. It may further widen the divide between the two types of IoT adopters – determined advanced users and those who were struggling to understand ROI and monetize their IoT initiatives and to go beyond mere data collection. The second group will likely postpone their IoT investment, not seeing clear benefits in the near and long terms, and fall further behind, while others will leverage their IoT expertise focusing on the use cases that will help them secure a more advanced position in the next normal,” said Svetlana Khimina, senior research analyst with IDC’s Customer Insights & Analysis group.

IoT services, composed of the IT and Installation Services and Ongoing Service or Content as a Service categories, will be the largest technology group in 2020 and through the end of the forecast. Together, these two categories account for roughly a third of all IoT spending. Hardware spending is dominated by module/sensor purchases and will be nearly as large as IoT services. Software will be the fastest growing technology category with a five-year CAGR of 13.5% and a focus on application and analytics software purchases. 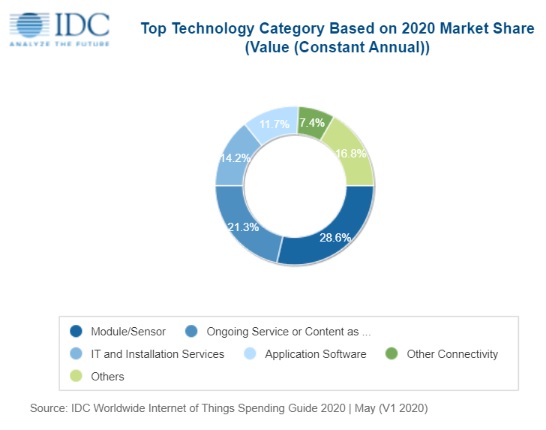 China, the United States, and Western Europe will account for roughly three quarters of all IoT spending throughout the forecast. Although the three regions will have similar spending totals initially, China's spending will grow at a faster rate than the other two regions – 13.4% CAGR compared to 9.0% and 11.4% – enabling it to become the dominant region for IoT spending. The fastest IoT spending growth will be in the Middle East & Africa (19.0% CAGR), Central & Eastern Europe (17.6% CAGR), and Latin America (15.8% CAGR) regions.

“COVID-19 has caused a significant disruption in China’s IoT market – especially in the areas of supply chain, production, and delivery and deployment, resulting in delays that have significantly reduced IoT spending across all industries and use cases in early 2020. As China continues along its road towards recovery, we expect the market to bounce back in the following years as enterprises begin to grasp the vital role of IoT in epidemic prevention and control, as well as their capabilities in mitigating market disruptions,” said Jonathan Leung, senior market analyst, IDC China.