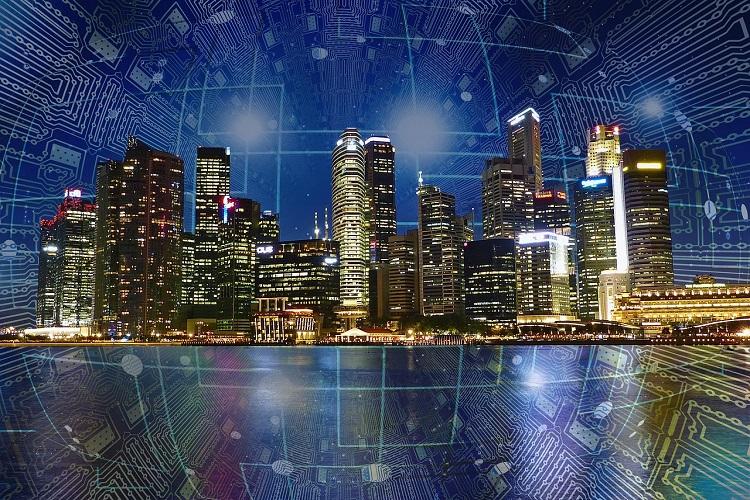 If we needed more proof of why India must turbocharge its Smart City project, here comes a study from Capgemini Research Institute that explored responses from 10,000 citizens and over 300 city officials across 10 countries and 58 cities to find today’s city living is falling short of citizens’ increased expectations in the digital age. India and its major metros were a part of this study.

We the metro dwellers of India already know it – overcrowding, high levels of pollution, traffic chaos, inadequate public transportation, thinning green cover, polluted and vanishing water bodies, monsoon mayhem – are just some of the problems that city dwellers have to live with. It is not surprising hence that the report found many citizens are frustrated with the current set up of the city in which they live and are prepared to show their opinion by leaving for a more digitally advanced city.

The report “Street Smart: Putting the Citizen at the Center of Smart City Initiatives” reveals that on an average, 40% of residents may leave their city in the future due to a variety of pain points including digital frustrations. But ideally, they would like to move to a Smart City as more than half of citizens surveyed (58%) perceive smart cities as sustainable and that they provide a better quality of urban services (57%). More than a third of them (36%) hence are willing to pay more for this enriched urban existence.

The report identifies key pain points that could compel people to leave the city. Overall 38% would leave the city over transportation and mobility issues as commuting consumes a large amount of time. Further, 41% would leave over lack of good job opportunities and low economic growth while 52% would consider quitting the city life over high cost of living. A bane of city life is the isolation and feeling of loneliness and this figures among cultural and personal issues that may drive citizens out of the city. Lack of community life would drive 35% to leave, while the lack of belongingness would be reason enough for 34% to pack up. Sustainability is another big desirable attribute of city life and lack of it may drive many to head out to the countryside perhaps –as the survey found 42% may want to leave because of high levels of pollution and 36% would quit city life over lack of sustainability initiatives. City life has its own security challenges and overall 40% may consider leaving the city for lack of public security.

A key impetus for citizens wanting to shift out to a Smart City could have been provided by COVID-19 pandemic. Smart Cities can help to address pandemics, as Capgemini found. As the world tackles COVID-19, city officials are using technology to address some of the challenges faced. The report says 68% of city officials have found that digital initiatives like apps which connect people to healthcare facilities or provide remote patient monitoring are helping them to manage the crisis. For example, the city of Bengaluru repurposed its command center into a ‘war room’ to follow patients and draw up containment plans using heat mapping technologies and in Rome, airport staff are using smart helmets with augmented reality and thermal scanners to screen multiple visitors simultaneously while maintaining a safe distance.

A surprising finding is that while overall over a third (36%) of citizens are willing to pay more for using smart city initiatives, India has the highest percentage of such citizens at 69%! The closest to it are Italy, US and Spain at 40%, 41% and 42% respectively.

India launched its "100 Smart Cities Mission" on 25 June 2015. The first batch of 20 cities, known as 20 Lighthouse Cities, were selected in the first round of the All India City Challenge competition in which cities competed at the state level with other cities within the state. The state-level winner then competed at the national level Smart City Challenge and the cities obtaining the highest marks in a particular round were chosen to be part of the mission.

The government’s seriousness about development of Smart Cities was displayed when while presenting her first full union budget 2020-21, Finance Minister Nirmala Sitharaman proposed the setting up of five new smart cities. These five are proposed to be different from the cities under the Smart Cities Mission (SCM) that have been selected under city challenge and are being modeled as lighthouse with area based (very small part of city) development and pan city solutions. These five new smart cities are proposed to be full-fledged new development like GIFT City, Special Economic Zones, etc. The purpose behind these five new smart cities is to attract investment, drive economic growth, and improve the quality of life for people, setting the virtuous circle of growth and development. Notably, the SCM was allocated INR 6,450 crores in 2019-20, which is 5% higher than the revised estimates of 2018-19.

But what is a Smart City?

The Smart Cities Mission, Ministry of Housing and Urban Affairs, Government of India, provides an answer. It says there is no universally accepted definition of a smart city and as a result it means different things to different people.

This means that how each government has conceptualized a Smart City varies from country to country, state to state and city to city depending on the level of development, willingness to change and reform, resources and aspirations of the city residents. Therefore, a smart city in Europe would definitely be different from one in India, and even within Europe and India, it would differ.

To bring about some level of standardization, the Mission has introduced some definitional boundaries. Going by the ideal wish list of infrastructure and services of a city dweller for a smart city, urban planners ideally aim at developing the entire urban ecosystem, which is represented by the four pillars of comprehensive development-institutional, physical, social and economic infrastructure. This entire ecosystem represents the aspirations of a city dweller of an ideal smart city. 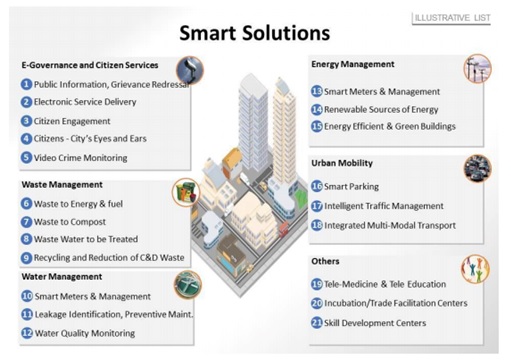 The Mission envisages the development of this smart city as a long-term goal where cities can work towards developing such comprehensive infrastructure incrementally, adding on layers of ‘smartness’. The Smart Cities Mission hence aims to promote cities that provide core infrastructure and give a decent quality of life to its citizens, a clean and sustainable environment and application of ‘Smart’ Solutions.

Hence, the National Smart Cities Mission is an urban renewal and retrofitting program that focuses on sustainable and inclusive development to create a replicable model which will act like a lighthouse to other aspiring cities. The deadline for completion of the initial projects is between 2019 and 2023.

Although smart cities can solve some of the traditional pain points experienced in cities such as public transport and security, serious challenges to implementation exist. The report reveals that only one in ten city officials say they are in the advanced stages of implementing a smart city vision, and less than a quarter (only 22%) have begun implementing smart city initiatives – a particular challenge as two-thirds of the world’s population is expected to live in a city by 2050, with the number of mega cities set to rise from 33 today to 43 by 2030. Moreover, there is a considerable global desire for smart cities among citizens, meaning an accelerated approach would be well received.

Data and Funding: The report identifies data and funding as critical implementation challenges. 69% say lack of funding for smart city initiatives in the city’s budget from government is a major impediment. Data is central to smart city optimization, yet 63% of global citizens say the privacy of their personal data is more important than superior urban services. Meanwhile, almost 70% of city officials say that funding their budget is a major challenge, and 68% of officials say they struggle to access and build the digital platforms needed to develop smart city initiatives. From a citizens’ perspective, 54% think BigTech firms would provide better urban services than those currently in place.

Other Challenges: Among the challenges, 68% identify lack of technology expertise to provide digital platforms for urban services as a major challenge. For 69%, it is the lack of clear vision and planning of future blueprint for city that is stalling the progress and for 62%, it is lack of collaboration with technology partners during design and implementation that must be urgently tackled.

India’s Challenges: Various experts have identified several challenges in implementation of smart cities specific to India. Retrofitting existing legacy city infrastructure of scattered and isolated legacy systems poses integration challenges. This is, however, a prerequisite to achieving city-wide infrastructural efficiencies. Financing smart cities is another major challenge as the cost keeps escalating and most cities do not generate sufficient revenue to even pay their municipal staff. The projects are also hamstrung by lack of private participation and capacity building. Technical constraints are another big challenge as most urban level bodies lack the technical capacity and personnel to ensure timely and cost-efficient implementation.

To accelerate implementation of Smart Cities, the report suggests developing close collaboration between key stakeholders. Innovative technology – and the funds to innovate and deliver – will not in themselves create a smart city, says the report. Rather, collaboration between stakeholders like local government officials, citizens, and third parties including start-ups, academic institutes or venture capital funds is the key. Capgemini recommends a three-phased approach for city officials to achieve this:

To recapitulate, our cities are becoming inhabitable with rising congestion, pollution and lack of civic amenities. The crowded cities also present public security challenges. City dwellers are increasingly becoming conscious of their unsustainable current lifestyles and how they are hastening the destruction of the planet. The growing disenchantment with city life may push majority of city inhabitants to abandon the cities unless we provide them sustainable alternatives in the shape of smart cities. As Pierre-Adrien Hanania, Capgemini’s Global Offer Leader for AI in the Public Sector, says: “Smart city perception and status have become an important differentiator for citizens. It has become crucial for city planners and officials to realize that the citizens are the smartest asset a city has and to put them at the center of smart city initiatives. City officials must work to ensure that technology-led interventions give people the experience and quality of life that they want and need. By doing so, cities will avoid their inhabitants leaving for another city and will enhance their digitization pathway, benefiting of the willingness of citizen to invest in their home. Furthermore, smart initiatives allow cities to be more resilient to challenges like COVID-19 but to achieve that, it is key to federate both the data environment and the city’s stakeholders in order to shape the blueprint of their city together – putting sustainability, data privacy and the city’s DNA at its core.”

It is time for India to put Smart Cities 2.0 in high gear.