The rise and rise of UPI

And what it could mean for the Indian banks’ technology planning 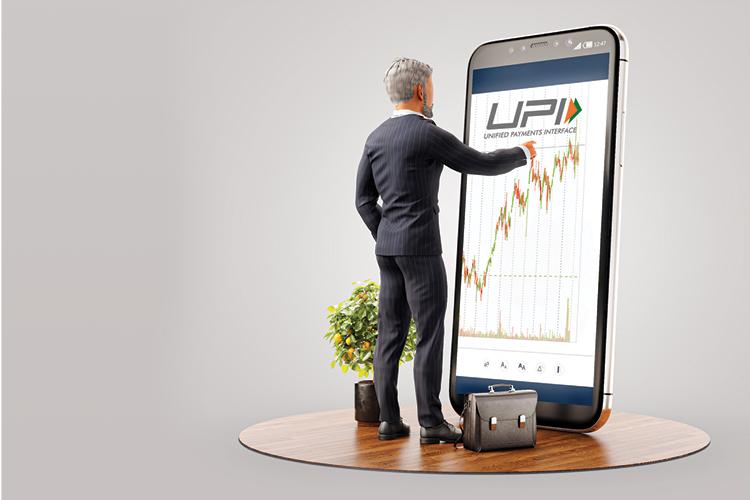 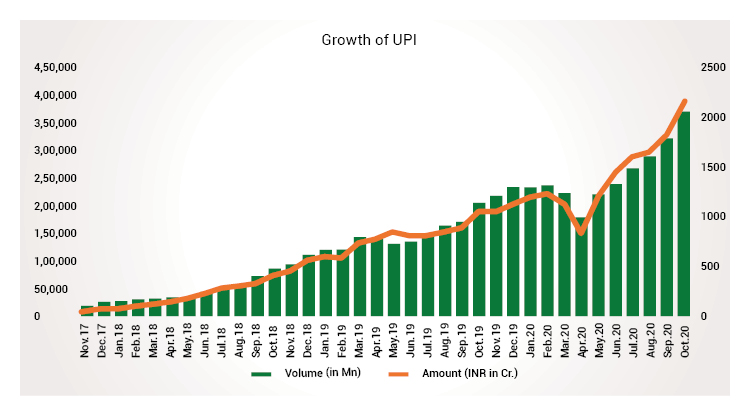 A comparison with a similar system will put the growth in context. In FY 2016-17, IMPS transactions totalled 507 millions with a total value of INR 4,11,624 crores. UPI, on the other hand, totalled 17.86 million transactions with a total value of less than INR 7,000 crores. The corresponding figures for the last year (2019-20) for IMPS were 2,579 million (more than five times) and the value transacted was INR 23,37,541 crores (close to four times). UPI, by the way, had grown to 12,519 million (about 70 times) while value transacted on UPI rose to INR 21,31,330 (more than 300 times). In the first six months of this year (FY 20-21), UPI had already done 8,487 million transactions with a value of INR 15,49,240 crores while IMPS had done about one-seventh in terms of transactions and about 20% less in terms of transacted value, UPI having overtaken IMPS in February this year, in terms of value—and thus establishing itself as the prime mode of retail transaction.
Wallets, which actually kickstarted digital payments in a major way, accounted for 397 million transactions as compared to UPI’s 1,619 million transactions. Value of transactions would not be a fair basis for comparison as wallets have restrictions of INR 10,000 per month without KYC and INR 1,00,000 per month with KYC. UPI, on the other hand, does not require any KYC, as that responsibility is with banks, anyway. So, higher valued transactions can be done. In fact, UPI transaction limit of INR 1 lakh per day is not an issue for most of the ordinary users.
Three reasons have contributed to UPI emerging as the most popular retail payment mechanism – a number of inherent features, almost no cost to the user & the merchants, and very aggressive promotion by the government.
What needs to be examined is how important are the three reasons in comparative terms. For something to sustain in the market, it has to compete on natural market parameters, not artificial parameters like the first two, though their role in giving an initial impetus cannot be underestimated.
Is it sustainable?
It may be too dramatic to ask if UPI is a sustainable architecture, considering the threshold volume that it has already reached. Nevertheless, it is important to examine whether everything is right with UPI and if the growth can be sustained over a period—especially if the above-mentioned push is withdrawn.
Users have been complaining about false success notifications; i.e. while the app said the transaction was successful, the money was not credited to the receiver’s account. Despite several follow-ups with their banks and NPCI, the issue took a long time, paper trail and exchange of several messages to resolve. In a report in March 2018, business daily, Business Standard, wrote about the problem, citing several aggrieved users of UPI.
But with very tangible convenience and cost advantages, these ‘exceptions’ did not adversely impact the popularity of UPI as a payment mechanism.
After all, such exceptions were few and far between. These errors happen when the transaction is declined due to technical reasons, such as unavailability of systems and network issues on bank or UPI side and are hence called technical declines (TD) to distinguish them from declines due to user side issues, such as wrong PIN, wrong account number, violating per transaction or per day limits, etc., which are called business declines (BD). While the business declines are not due to the UPI system, technical declines are clearly due to issues on the system side. 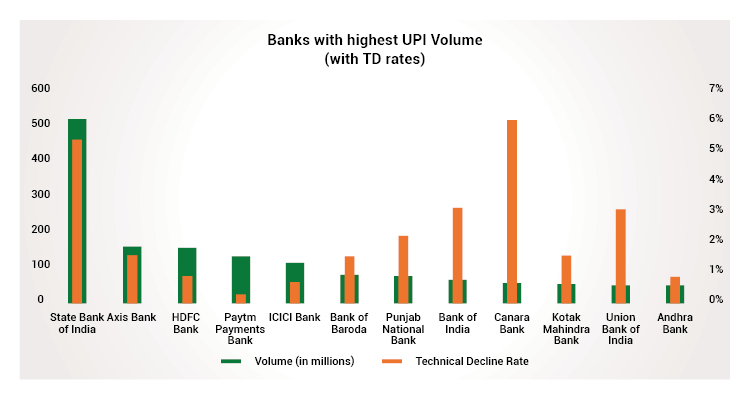 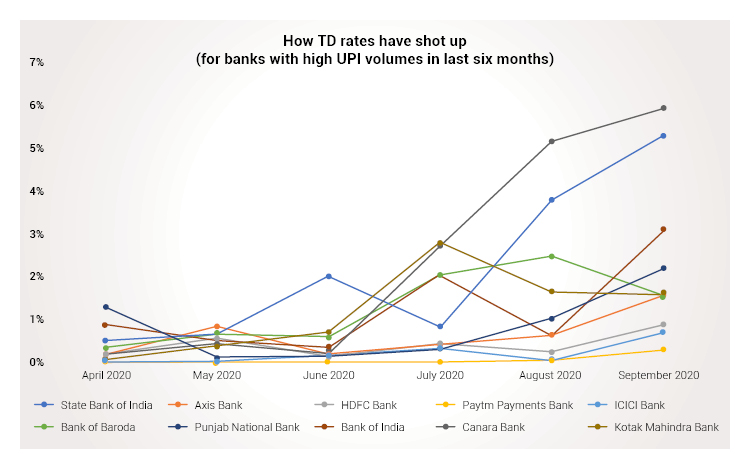 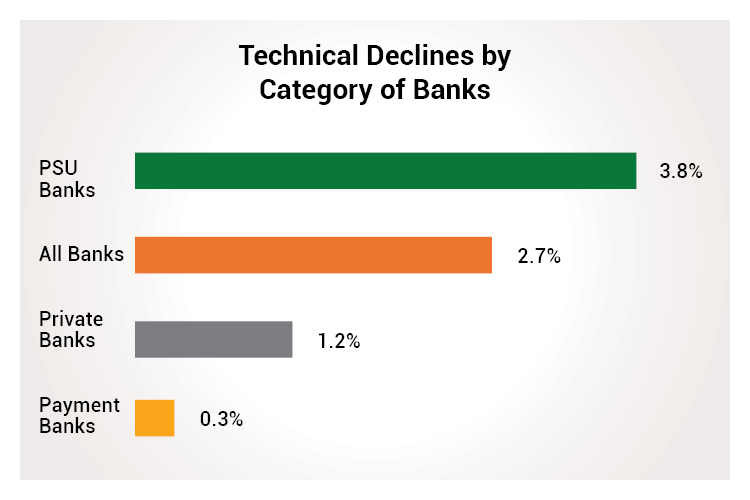 But what is revealing is the sharp contrast that exists between public sector and private banks. While the 11 private sector banks saw a technical decline rate of only 1%, the public sector banks’ TD rate was almost four times higher at 3.8%. Within private sector banks, both the payment banks – Paytm Payments Bank and Airtel Payments Bank - saw technical decline rates of less than 0.4%.
The reason for this contrast is not too difficult to guess. Many of the public sector banks have aging digital infrastructure, which are probably equipped to handle these high volumes. UPI transactions require almost real-time communication involving five servers—payer payment service provider (PSP), remitter bank, UPI system, payee PSP and the receiver bank. Any latency or break in communication can result in transaction failure. In times of high volumes of transactions, server may choke. Since the UPI request hits a bank’s core banking system, unlike the wallets, it puts pressure on the bank’s infrastructure.
So, even though Paytm Payments Bank and ICICI Bank have high volumes, their technical decline rates are quite low. Most older banks need to upgrade/modernize their infrastructure to ensure that technical declines are minimized. Private sector banks and the new payment banks have state-of-the-art digital infrastructure that handle the transactions better.
But thanks to the zero MDR rule mandated by the government last year, banks are not supposed to charge any fees which means they do not earn anything from the UPI transactions. So, they have little incentive to upgrade the infrastructure.
Banks and NPCI have been voicing these concerns and have been demanding zero MDR rule to be changed. But even if the government listens to that, it is highly unlikely that things will immediately change for better.
Another potential threat in the future is the vulnerability of NPCI system. If the media reports are true, NPCI is planning to cap share of transactions of any single payment company in order to decrease dependence on any single third-party application, to avoid a system failure. The same could be asked about NPCI system too. While UPI system uptime has been maintained above 99.8% every month since January, that could be vulnerable too. And even 99.83% (April) or 99.85% (September) are low by a real-time transaction system standard.
In short, while UPI has had a successful run so far, past performance cannot be guaranteed. Especially, if the government decides to stop intervening.
For the banks, which have to keep their customers, there is no option but to modernize their digital infrastructure to handle high volumes of real-time transactions, as volumes will only go up.
Beyond UPI too, banks need to assess their readiness for an increasingly 24/7 transactions world with high volumes of transaction. That is the next challenge for Indian banks, especially the public sector and old private sector banks.
Read the CIO&Leader October 2020 Magazine

UPI has been aggressively promoted and incentivized by the government. From prime minister to IT minister and all senior government officials have promoted UPI